Yes. It once was a yellow bell pepper soup like this and then it decided it needed a hint of spices. Maybe some cinnamon, some clove. Star Anise? It threw out the carrot and celery and decided it would rather break bread with the charmingly sweet butternut squash. It decided to pull a few more potatoes to the pot (for a more comfortable bed). Ah. the luxury.

And so was born this yellow creamy sunshine-y soup. 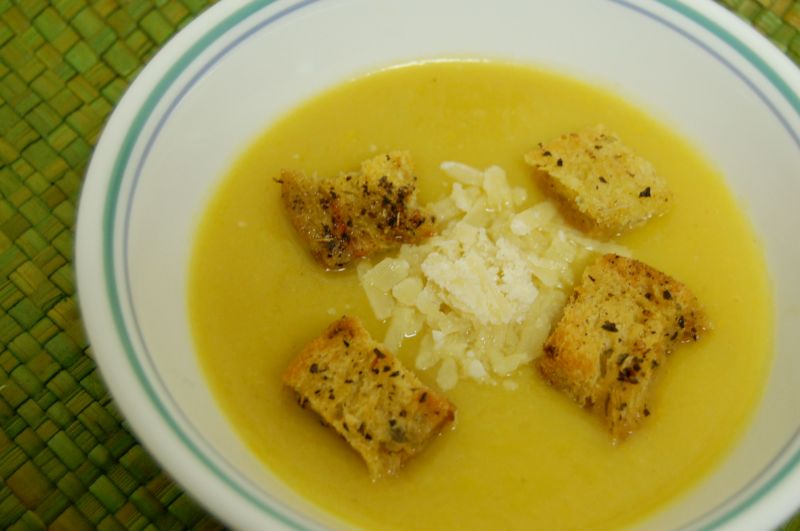 a couple of slices of bread, olive oil, any Italian spice blend (to make the croutons)

Heat a tablespoon or two of olive oil. Once the oil is hot, add the cinnamon, clove and star anise and wait a few seconds till the oil is fragrant. Then add the chopped onions and saute till the onions become soft (but do not brown). Add the butternut squash.

Once the onions are soft and a light translucent pink add the yellow bell peppers and the whole (peeled) potatoes. Cover with the broth and let it cook for around 45 minutes to an hour.

[While the soup is cooking, make the croutons as outlined below].

After 30 minutes, add the bay leaf.

Once the bell pepper pieces are tender and the potatoes are cooked, switch off the heat.

Remove the whole spices, set aside and puree the rest (I used an immersion blender). Once the soup is pureed add the spices back to the pot.

Pre-heat the oven to 375 degrees. Cut 2-3 slices of bread into squares or rectangles (or really, into any shape you wish..:)). Mix oil olive oil with the spice blend. Coat each piece with olive oil mixture. Line a glass bowl (I used a rectangle pyrex bowl) with aluminum foil and bake the bread pieces for 10-15 minutes or until the pieces are crisp and browned.

Spoon out the soup into bowls and top each bowl with a heaping of parmesan cheese and a few croutons.

Verdict: The soup was deliciously velvety. The spices were subtle but there, highlighting the peppery overtones that were  followed by the sweetness of the squash and the creamy taste of the potatoes. It’s structure was almost perfume-like with top, middle and base tastes. While I loved the original recipe, I really enjoyed the addition of the spices and the butternut squash. And, it tasted lovely the next day as well.

I think, a spoonful of this soup (with the cheese and a crouton or two) makes the medicine go down the world an infinitely better place.

Hope you all are having a wonderfully Christmassy day. It isn’t snowing where I am. But if it is, where you are, throw some in the air for me, will you?