When Nupur announced the Iron Chef Edition of Blog Bites, I had lots of  red bell peppers in my fridge that I wanted to use up before my next trip to the farmer’s market. This has been a super busy month for me- but there was no way I was going to miss an opportunity to pick an ingredient and think of two ways of showcasing it a la’ Iron Chef. And so, of course I picked Bell Pepper.

The first dish, is a red bell pepper chutney, south Indian style based on a recipe from My Indian Cooking .

I used the ingredients mentioned in the recipe. The recipe is very forgiving, so the amounts of each ingredient used can be varied. But this is how I did it.

I extracted some tamarind juice from a small ball of tamarind, by placing it in a bowl with a little bit of water and heating in the microwave for 30 secs. In a couple of tsps of unrefined sesame oil, I added 1.5 tsp of mustard seeds. Once they spluttered , I added 1 tbsp of chana dal, 1.5 tbsp of urad dal, 1tsp of cumin seeds and a couple of red chillies. Once the dals were roasted (they will turn golden brown), I tossed in some chopped red bell pepper (I used four small-medium sized ones).  I also added  a pinch of turmeric and salt and let the peppers cook for 5-10 mins. 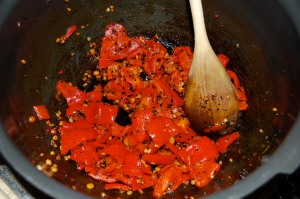 Once the bell peppers were cooked, I ground them along with the tamarind juice (you can add more or less according to taste. Add a little bit first. Taste and then add some more.  I took out 1 red chilli before grinding the mixture, to reduce the heat).

Enjoy with dosa, upma  or even as a sandwich spread. I love the pairing of the spiciness from the chillies and the tanginess from tamarind, with the sweetness of the  red bell peppers. Next time I might reduce the amount of chana dal I use, just because I want less of the nuttiness from the dals- but my husband loves the taste of the dals, so I might have to keep that in mind.

The second dish is a kadhai paneer inspired by this recipe from Savi-Ruchi.

Before I begin describing the recipe, can I just whine about how hot it is today. Soooooo hottt!!! Ok, that helped.

Now, on to the Kadai paneer. I followed the recipe fairly closely, except in the way I prepped the paneer.  Also,I did not blanch the tomatoes, because I am lazy  that way (plus, I’ve never understood the advantages of doing so..:)). And.. I skipped the butter and garam masala.

3 cloves of garlic (or more- my theory is you can never use too much garlic , whether in a spaghetti aglio e olio or in palak paneer)

14 oz of Paneer (I used the Verka brand this time)

I coarsely ground 1 tbsp of corriander seeds with 2 red chillies . Then I heated some oil and added the cumin seeds. Once the seeds began to sizzle, I added the coarsely powdered corriander seeds and chillies. After half a minute or so, I added the onions and garlic and let them cook till the onions were translucent and beginning to brown. (The smell at this point is lovely, so do stop to savor its nuances). Then I added the chopped tomatoes, bay leaf , salt and a dash of chilli powder. I let this cook for around 10 mins on low heat, till the tomatoes were cooked down and very soft.

In the meanwhile, I prepped the paneer this way:

I heated a non stick pan, cut the block of paneer in half and placed the two halves on the pan. I heated the  slabs of paneer on all four sides, till they were soft but not brown. Then I dunked the paneer into some warm water, before cutting the slabs into square pieces.

To the tomato gravy like paste, I added the chopped green bell pepper and green cardamom and cooked it till the bell peppers were almost done . I added some water at this point- the amount depends on how thick you want the gravy to be. Then I added the chopped paneer and corriander powder and let the dish cook for a few minutes on low heat so the paneer could absorb the spices. Just before turning the heat off, I increased the flame to medium for a few minutes, so some of the fat from the paneer could sort of ooze out and lend a creaminess to the tomatoe-y gravy. I topped the Kadai Paneer with some chopped cilantro.

I plan to eat the Kadai Paneer right now with chapattis and an episode of Mad Men. However, one of my favorite ways to eat paneer dishes like these is sandwiched between two slices of bread  and microwaved for a minute or 2 or grilled in the oven/stove top.

This dish can be veganized by simply skipping the paneer, or using tofu instead.

I am sending these two dishes off to One Hot Stove to join the other dishes showcasing other ‘secret ingredients’.

Have a great weekend!!