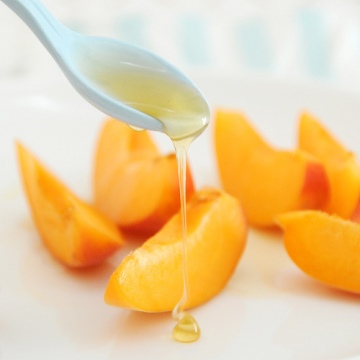 I had been drooling at the various accounts of Viktoria Minya’s Hedonist but Victoria’s review at Eaumg made me long to try it, to see if it really was all that. How could a perfume that was supposed to smell of peaches and honey smell that good? Thankfully my longing did not reach epic proportions because the generous and darling Suzanne offered to send me a sample. And like Victoria said, I inhaled it, smiled and wanted the rest of the world to ‘be quiet and let me smell’. Hedonist is more than the sum of its parts (or rather less than the sum since the parts could seem a bit much to many). There is a succulent juicy peach, and lots of brown honey with bits of beeswax giving it some ‘chew’ as well as that slightly dirty ‘off’ smell that real honey can have. However, what Hedonist actually doesn’t have is that ooey gooey texture  of honey, (probably) because of the judicious use of synthetics that give it a lift, blowing air under its heavy golden skirt (excuse the awkward, inelegant metaphor). There is tobacco too, but Hedonist teeters at its edge, merely flirting with it rather than smoking (or chewing) it. There are white florals, jasmine and orange blossom, that mostly serve as accents to what is essentially a peach and honey perfume (but somehow so much more than those words convey). Sometimes, especially when I spray it on the inside of my elbow, I smell the white florals (mostly orange blossom) in the top notes, before the peach and honey, and that version smells lovely as well.

Freddie of Smelly Thoughts said, “the boozy notes from the opening become sharper rather than burning off entirely, lasting much longer than expected. It brings a harsh, slightly metallic element into the florals. Instead of smelling synthetic and out-of-place – it smells almost head-spinning, like you’ve been sniffing flowers for far too long and it begins to grate on you a little.” I see what he means as Hedonist does have a slightly reverberating quality. I was worried that this might bother me, but thankfully it doesn’t. For me, this aspect (if we are referring to the same thing, that is. And who can tell if we are.) ends up lending a heady quality to Hedonist that makes it seem elegant and perfume-like rather than like a gourmet dessert.

The above analysis of notes didn’t come at the first wearing . Oh no, the first time I wore it, I was immediately transported to the time (or times) I window shopped at five star hotels in India. I think this paragraph in an email to Suzanne sums up my feelings :

“It struck me as such an ‘exciting’ fragrance. And I don’t mean the adventure kind of exciting. But the excitement of a birthday or of Christmas. Or of going out on a very special date. Aesthetically it reminds me of a ‘Dior’ [Note: I realized later that it reminded me of Christian Dior’s Dune. Now I am not sure if that is because I first smelled Dune around the time-period that Hedonist transports me to. Or if they actually do share notes. To my nose it is especially the tinny reverberating, yet elegant quality that they seem to have in common]. I keep picturing this 5 star hotel in India that I visited when I was a child. My parents were invited to some gathering and I wandered about and ‘window shopped’ looking at the lovely displays of unaffordable things. And when I say that I don’t mean that I longed for any of it. I didn’t. As you say in your review of the perfume, there is not a negative or cruel note in the perfume, and neither was there any negative emotion in my head then. But it was very pleasurable just looking and feeling all that luxury. I still have to figure out whether the perfume smells like one of the five star hotels or just conjures up that image.”

Hedonist is luxurious and transportive, yes. But it also makes me gloriously happy in the moment that I’m in. It has the additional benefits of being a mood enhancer on stressful days. Also, it smells good. Really good. The kind of good that gives me this feeling at the back of my throat of wanting to drink it. It is priced at $195 for 45 ml. And I will be saving my pennies for it.  To wear, not drink, of course.