If Serge Lutens’ Tubereuse Criminelle was special because it met my olfactory ‘vision’ of tuberose, Un Lys served an almost opposite role: telling me about a flower, before I’d ever smelled it.  But let me start from the beginning.

I have always liked Un Lys. It is unabashedly pretty. So pretty, that it took me a while to realize that it was not just pretty but beautiful.  I remember reading Tom’s review on Perfume Smellin’ Things, and in the comments section he said “.. It’s lustrous without the usual Lutens oddness. It’s like someone asked him “Can’t you just do something pretty?” and he thought “You want pretty? I’ll show you pretty!” And then he came out with drop-dead gorgeous”.

And that echoes my sentiment exactly!

Un Lys just is. There are no notes to tease apart, no ambiguous overtones or undertones. What you smell in the beginning is what you smell at the end, linear as they come: Lilies rounded off with vanilla. A vanilla that is difficult to separate from the lilies- yet it is evident that vanilla is the note that holds this beauty in place, preventing it from being screechy or soapy. It also gives it the depth that takes Un Lys from just pretty to throat clenching-ly, jaw dropping-ly beautiful (excuse the hyperbole). 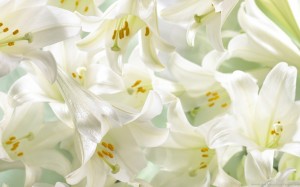 And now I have to admit, I’d never smelled lilies when I first smelled Un Lys. Yet it conjured up visions of burying my nose in masses of lilies.

One day, I was walking back from teaching a class in a part of campus that I didn’t frequent often. I was probably engaging in some kind of conversation with imaginary people when I thought I smelled something beautiful and very familiar. Un Lys, I thought. I was sure somebody was wearing Un Lys or perhaps I had some on my clothes, remnants from a previous wearing. You all know how this is going to end, don’t you? Very close to the building that I had exited was a bush covered with lilies. And I had one of those ‘picture postcard moments‘ of real life mimicking art, rather than the other way around. “This smells exactly like Un Lys”, I exclaimed to nobody in particular. And It did. It really did.